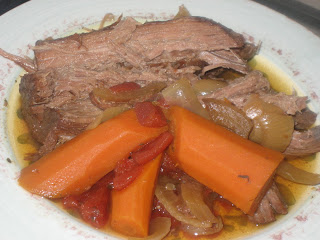 You get two for the price of one today folks! It’s always a good day when it’s two for one right?
I don’t use my crock pot enough. And every time I do use it I say the same thing. It really makes things so much easier by doing all the work for you on those days you don’t have the time to put in to cooking dinner.

So, first up is the pot roast. I love how pot roast turns out in the crock pot, always tender and full of flavor. The house was smelling so good all day while this was cooking. I didn’t have celery in the house when I was making this so I used sliced onions instead. Don’t eat both roasts for dinner…save one for your sandwiches.

2. Brown roasts on all sides in hot oil in a Dutch oven over medium-high heat (about 10 minutes). Place roasts, side by side, in a 6-qt. slow cooker. Add carrots and remaining ingredients.

Slow-cooker Chuck Roast: Substitute 1 (3 1/4- to 3 3/4-lb.) chuck roast, trimmed, for eye-of-round roasts; reduce salt to 1 tsp; dried thyme leaves to 1/2 tsp.; and dried marjoram to 1/4 tsp. Prepare recipe as directed through Step 2. Cook, covered, on LOW 10 to 12 hours or until tender. Remove roast and vegetables, and shred meat. Pour gravy mixture from slow cooker into a 4-cup measuring cup or fat strainer, and let stand 15 minutes. Spoon or pour fat out of gravy mixture in cup or fat strainer, and discard. Serve gravy with shredded roast and carrots.

Next up is Cheesesteak-Style Sandwiches using the leftover meat from your roast. Cooking up a double batch up front makes this second dinner a breeze. Just saute up some onions and peppers, put everything on some rolls and throw them under the broiler for a few minutes for some great sandwiches that everyone will love. 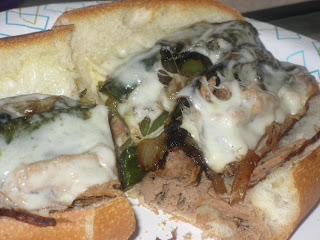 1. Sauté first 3 ingredients in hot oil in a large nonstick skillet over medium-high heat 15 minutes or until golden brown. Sprinkle with Creole seasoning and Worcestershire sauce.

3. Broil 6 inches from heat 2 to 3 minutes or until cheese is melted and top of rolls are toasted.

4. Microwave Slow-cooker Pot Roast gravy in a glass measuring cup at HIGH 1 to 1 1/2 minutes or until thoroughly heated. Serve sandwiches with gravy for dipping and potato chips. Garnish, if desired. 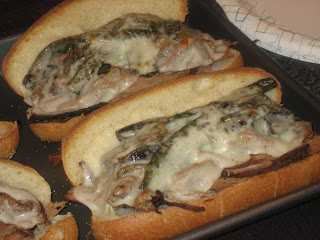 Remember the Grilled Sweet Potato Salad I made a couple of weeks ago? Well, I wasn’t in the mood to grill the other night so I roasted the potatoes instead and served them the same way. They came out great and it was actually a lot easier! 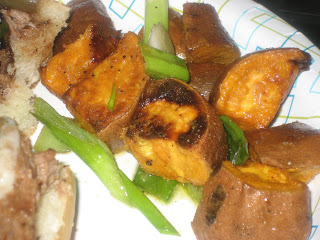