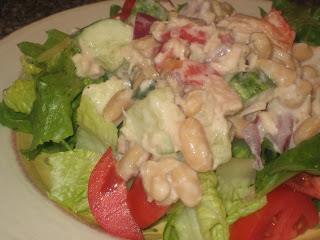 I know there are mixed feelings out there about Rachel Ray. Although she’s not a “chef”, you have to admit she’s a great cook and an even better entrepreneur. Her personality is quirky, she talks a lot but over the years I have grown fond of her. I did take about a year or so off of watching her shows though because she did start to annoy me after a while (I was pregnant at the time so maybe I was overly sensitive to annoying people?). I have learned a lot from watching her shows, I think many people just learning how to cook do too.

What I am really starting to like is her magazine, Everyday with Rachel Ray. I don’t subscribe to it (although I did just place my order), but I pick it up every now and then. I have found several recipes in there that have turned out really good. And most are fairly simple….like this one. This salad is perfect for a busy weekday night or lunch. We had it with our cream of mushroom soup the other night and it was delicious.

If you feel like your lettuce needs some extra dressing, squeeze some extra lemon juice over it. 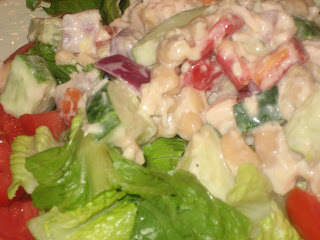 Arrange the romaine on 4 large plates and top with the tuna salad and tomatoes. 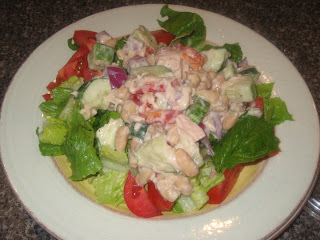