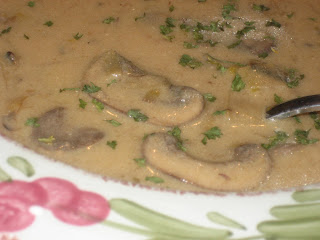 I love watching Barefoot Contessa’s show. I love her white kitchen with her rows of potted herbs. I love her porch and her backyard. I love her soothing voice and her humor. I love that she packs up her meals in little takeout boxes and heads to the beach for picnics with her friends. I often wish I could be one of her friends in her kitchen sipping on a glass of wine while cooking up some fabulous French dinner and calling Jeffrey to bring us home dessert.

Aggie’s kitchen is not Ina’s. Not even close. It’s more like a circus at times. It’s very loud with little feet running about, and a hungry 80 lb dog lingering under foot waiting for some scraps. I’ll spare you all the details though I’m sure many of you know exactly what I am talking about.

This week’s Barefoot Blogger recipe was chosen by Chelle of Brown Eyed Baker. This soup smelled so good while it was cooking. I almost had to stop before putting the half and half in and just eat it as it was. I’m not a huge fan of cream soups…but I decided I would try this out anyway. Of course, for the sake of trying to win the household Biggest Loser competition, I had to do my best to lighten this up. I think lightening it up definitely took away from some of the flavor, but it still turned out pretty good. I didn’t use any of the butter, just olive oil, so it wasn’t as rich as it probably should have been. I also wish I would have seasoned it just a bit more to make up for the lack of butter and heavy cream. But this isn’t the recipes fault, it’s always an experiment when you try to lighten up an original recipe.

I like the base of this soup and will probably make it again without the cream. I think it would be really good with barley in it.

In a large pot, heat 2 TB of olive oil and add leeks. Season with salt and pepper. Cook over low heat for 15-20 minutes, until the leeks begin to brown. Add the sliced mushrooms and cook for 10 minutes or until they are browned and tender. Add the flour and cook for 1 minute. Add the white wine and stir for another minute, scraping the bottom of the pot. Add the chicken stock, thyme, salt and pepper and bring to a boil. Reduce the heat and simmer for 15 minutes. Add the half and half and parsley, season with salt and pepper, to taste, and heat through but do not boil. Serve hot.

I recently received an award from Mandy at Home With Mandy! She’s very sweet and has a great blog with lots of pictures of her delicious food!! Go check her out! Thank you so much Mandy!

Find more comforting and delicious recipes on my Soup, Stew and Chili Recipes Pinterest board: