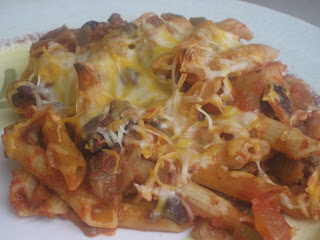 I love it when you can take a traditional recipe like Baked Ziti and turn it into something else just by changing a few simple ingredients. I wish I could take credit for this recipe, but I can’t. I found it on a South Beach Diet message board last year along with lots of other great healthy recipes. I added a little more flavor to it though by throwing in some spices and additional vegetables.

I can take credit for the vegetables though…I had originally planned on making Summer Vegetable Gratin for dinner, but wanted to try and incorporate the same flavors that were in the pasta instead. They turned out great and I used the leftovers on a pita pizza the next day. 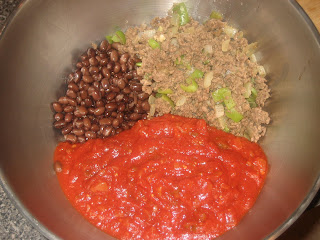 1/2 lb of whole wheat penne (1/2 box)
1 lb of lean ground beef
1 TB olive oil
2 cloves garlic, minced
1 large bell pepper, chopped (I used a cubanelle because it’s what I had in the fridge)
1 large onion, chopped
1 tsp cumin
1 tsp chili powder
2 jars of salsa
1 can black beans, drained and rinsed
salt and pepper
2 cups of shredded cheddar or Mexican blend cheese (use 2% if you are trying to keep it lighter)

Bring pot of water to boil for pasta, cook according to directions.

Pour half of pasta mixture into casserole dish. Spread 1 cup of shredded cheese over pasta. Add rest of pasta over cheese and top with remaining cheese. Place in oven and cook for 30-35 minutes or until bubbly and cheese is golden. 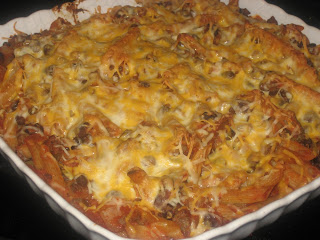 And on the side… 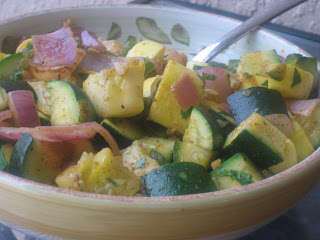 Heat oil in large nonstick pan over med high heat. Add garlic and vegetables and saute. (Make sure you cook vegetables over high enough heat to avoid them getting mushy). Add spices, salt and pepper and toss. Add cilantro and toss. 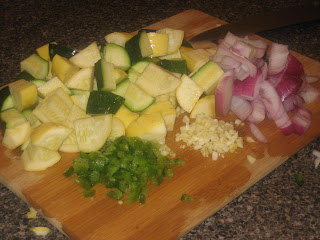