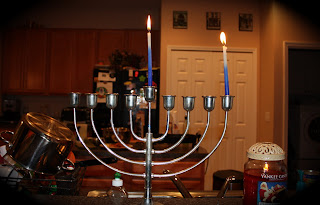 Last night was the start of Hanukkah, and we celebrated by making latkes. This was my first time making them, but not my first time eating them. I’ll tell you, now that I know how to make them, I will definitely be making them more often. They were delicious…and were a hit with the whole family. 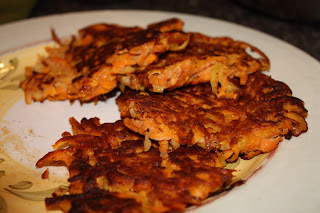 I decided to make a sweet potato version and I’m so glad I did. I went the more savory route and just seasoned them with salt and pepper and a pinch of cayenne. We served them with a dab of sour cream. 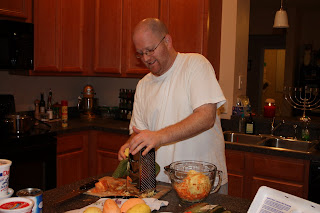 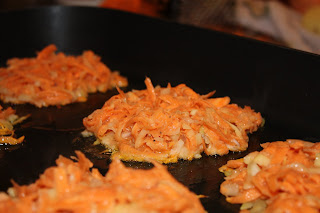 Grate the onion on a box grater into a large bowl. Grate both potatoes into the same bowl, grating down the length of the potato to get long strands. Toss the potatoes with the onions as you work to keep them from discoloring. Put potato mixture in a clean dish towel and wring out excess liquid. Toss the latke mixture with the flour, salt, and cayenne. Stir in the egg.

Heat a 1/4-inch oil in a large cast iron or other heavy skillet over medium heat. Working in batches, spoon about 1/4 cup of the latke mixture into the skillet, pressing lightly to form 3-inch pancakes. Take care not to overcrowd the pan. Cook, turning once, until just golden, about 2 minutes per side.

Serve the latkes topped with a small dollop of sour cream. Serve immediately. 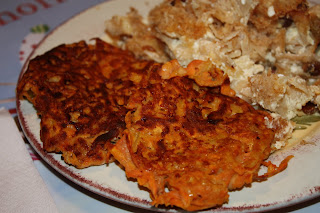 Originally, I had planned to make brisket. I got started on dinner kind of late last night not realizing it took 2-3 hours to cook a brisket. Oops. So I made a last minute decision to make a sweet noodle dish called kugel. No one complained. 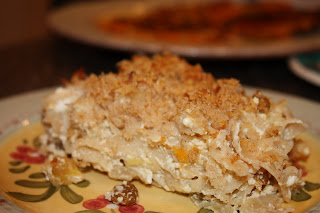 I’m not sure if Kugel is traditional Hanukkah food…but since I had all the ingredients on hand it worked for us! Kugel is a sweet noodle dish, baked with cottage cheese, sour cream and raisins. Using crushed pineapple in this version helped sweeten it naturally without having to add too much additional sugar. I lightened up a Paula Deen recipe I found in her Paula Deen & Friends cookbook and added a crumbly topping to it. The kids loved it! 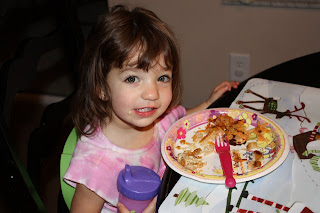 Combine the warm noodles and butter in a large glass bowl. Add the cottage cheese, sour cream, cinnamon, sugar and vanilla and stir gently. Add the eggs and mix gently but thoroughly. Add the raisins and pineapple, if using. Pour into prepared baking dish. Make topping by combining butter, panko and cinnamon sugar in small bowl. Spread over casserole and bake for 1 hour. 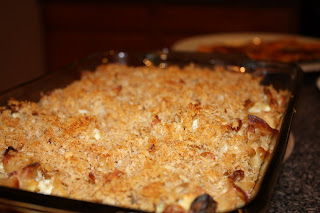 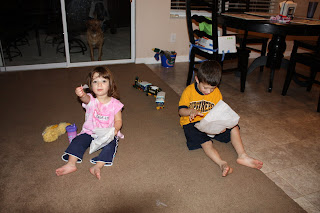 (the kids opening up their Hanukkah present…Gina is very excited about the paper!)

For another latke recipe and a lesson on how to play the dreidle game visit Prudy here!

We are off to Sea World today to ride the Polar Express!!
Have a wonderful week celebrating your holiday!!