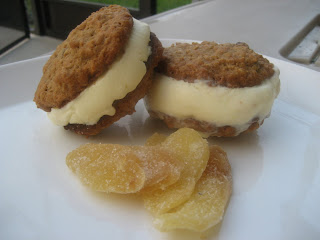 I’ve decided to challenge myself a bit in the kitchen this month. I’ve been eyeing the Royal Foodie Joust over on The Left Over Queen’s blog for quite some time now. Every month the challenge is based on creating a dish based on using 3 ingredients chosen by the previous month’s joust winner. This month’s ingredients are 1. ginger (in any form) 2. citrus (of any kind) 3. whole grains

I immediately thought about doing a dessert of some kind. I just bought an ice cream machine and really wanted to try it out. That’s how the Ginger Gelato came to be….and what better than having gelato sandwiched between two Orange Oatmeal Raisin Cookies! Yum!

This ice cream treat turned out fantastic. My brother and husband were my taste testers and they both gave it a “2 thumbs up”! 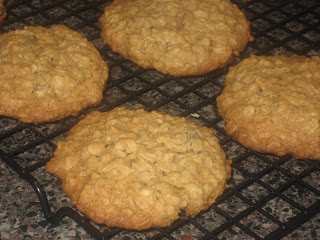 Preheat oven to 325 degrees. Line 2 baking sheets with parchment paper and set aside. In medium bowl, whisk together flour, cinnamon, baking soda and salt. Stir in the chopped walnuts. Set aside.

In the bowl of an electric mixer fitted with the paddle attachment, beat the butter and brown sugar on medium speed until light and fluffy, 3-4 minutes. Add the maple syrup and mix to combine. Add the egg, vanilla, orange juice and zest; beat until well combined, about 1 minute scraping down the sides of the bowl as needed.

With the mixer on low speed, add the flour mixture in two batches; mix until just combined. Add oats and raisins; mix until combined. 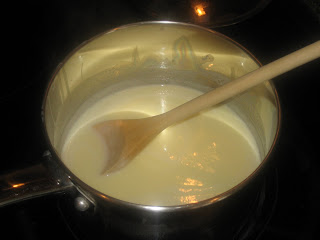 In a saucepan, combine the milk, half and half, half of the sugar and a tiny pinch of salt. Heat, stirring frequently until bubbles form around the edges. Do not boil. In a bowl, combine the remaining sugar and egg yolk, and whisk until thick and pale yellow. Temper the egg mixture by pouring 1/4 cup of the hot milk into the eggs, whisking constantly. (This raises the temperature of the eggs so they don’t scramble when added to the other ingredients.) Whisk the egg mixture into the saucepan with the rest of the milk. Stir with a wooden spoon over medium heat until the mixture thickens enough to coat the spoon, about 6 minutes. Strain into a bowl that’s set in a larger bowl filled with ice water. Stir the mixture as it cools. Fold in the ginger. Transfer to an ice cream maker and freeze according to manufacturer’s instructions. I churned mine for 25-30 minutes. Freeze gelato for at least 2 hours before assembling sandwiches. 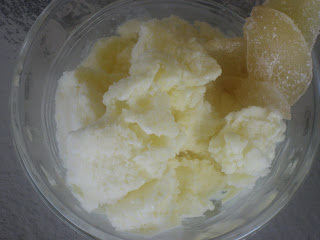 To make Ginger Gelato Sandwiches: Place a scoop of gelato on the flat side of the cookie. Take another cookie and press flat side on top of gelato to make a sandwich. Place sandwich in storage container and freeze for 1 hour before serving. 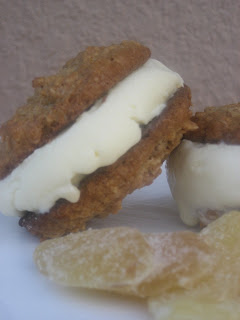