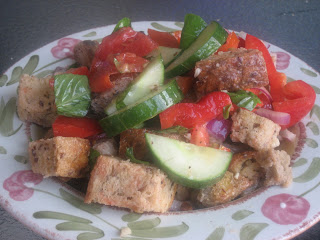 Here we are … another Barefoot Blogger Thursday! I was really excited about making August’s first recipe Panzanella, which was chosen by Melissa of It’s Melissa’s Kitchen. I’ve heard of panzanella, I may have tried it before, but I’ve never actually made it myself. It is such an unbelievably fresh and simple salad but at the same time quite impressive.

The recipe calls for using a French bread but I decided to change that up a bit. I wanted to incorporate a whole grain bread in it so I found a hearty whole grain with flax loaf at my grocery’s bakery, as well as a yummy kalamata olive bread. I can’t wait to make this again!

Oh and I have to just say….Congratulations Michael Phelps! I am just amazed at what he is accomplishing. Unbelievable!

Heat the oil in a large saute pan. Add the bread and salt; cook over low to medium heat, tossing frequently, for 10 minutes, or until nicely browned. Add more oil as needed.

For the vinaigrette, whisk all the ingredients together.

In a large bowl, mix the tomatoes, cucumber, red pepper, yellow pepper, red onion, basil, and capers. Add the bread cubes and toss with the vinaigrette. Season liberally with salt and pepper. Serve, or allow the salad to sit for about half an hour for the flavors to blend.